Last spring, I got a message request from someone who works at Mongol HD TV. She asked me whether if I'm available for an interview on the next week. It took me by surprise. Who would've thought a single blog post would get you an interview on the nation's highest-rated TV.

I accepted that offer instantly and then she sent me a sheet with questions which I correctly guessed as questions that are gonna be asked on my interview. She told me "write your answers as detailed as possible". Which made me wonder whether that could be an effective way to create quick notes for the hosts.

The TV show I invited to is a nighttime talk-show called "To and Fro". It was kind of ironic because I mostly talked about my morning rituals and other self-improvement techniques. 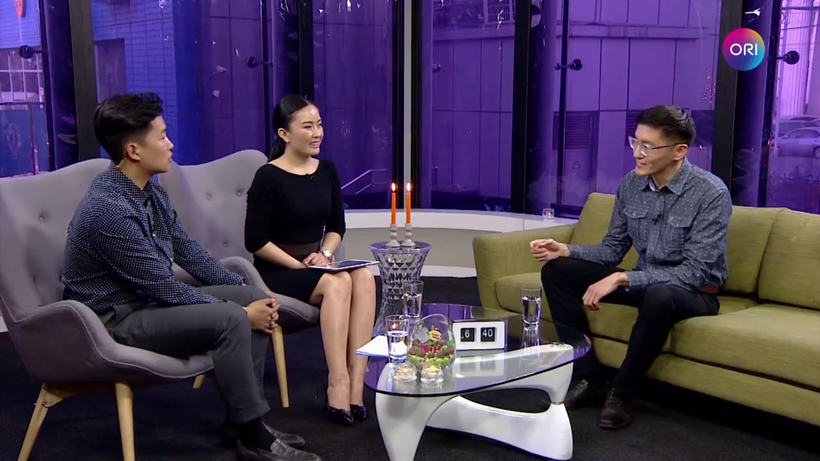 Me with the hosts. www.ori.mn

I went there at 5 pm and waited for half an hour in a lobby until the woman that contacted me came out to bring me in. The studio was bigger than I expected. But only a few members of the camera crew were there.

My previous experience with a TV studio was an entirely different situation. Our company was running a nationwide marketing campaign with lottery. I developed the lottery program that looks like slot machine and essentially generates sequences of numbers randomly at a given time. The deadline was so tight, I finished the code only few minutes before the shoot began. At that time, I was standing behind the cameras.

The interview began and the hosts asked me the questions they've given me beforehand. I talked about how I became a morning person and how it changed my personal and professional life.

The interview lasted shorter than I expected (15 minutes). I was really nervous, you can see my chest was pounding like crazy. When I just starting to get comfortable, the time was up and it ended. I felt somewhat disappointed after that because there were so much to talk about. Though, I hope someday I'll visit them again :)

Side project #0 – An instant translator

Things I learned from my first "successful-yet-failed" side project

Remote Work: How Do I Keep Track of My Productivity

The ability to focus intesely is a game changer!

Confessions of a remote worker

Things I've learned from working remotely for a year

How to become a TOP CERT Freelancer on PeoplePerHour

Things I noticed while working as a freelancer on PeoplePerHour

How do you pronounce "Zolbayar Bayarsaikhan"? And what does it even mean?

Guide to Develop a Rocket.Chat App

Step by step guide for developing your first Rocket.Chat App

Assassinations, The Mist, The Duke Namber... Let's take a look at the key events, people in Mongolian Politics.

Build your professional ePortfolio in English

My ePortfolio in Linkedin An efficient ePortfolio might be the best online investment you can make without spending a dime. Just tend your…

Speaking English Professionally #3 - On the phone

Lecture notes from Georgia Tech's "Speak English Professionally" course. Here's the  Part 1 Just looking through it won't give you much…

I am a shy person. Which might've been holding me back from many things in life. But on the bright side, it really shielded me from many…

Since the last year, I've been trying to improve my writing skill by practicing it every day. The improvement was not that big, but it…